From a hardware perspective the NANO SD is simply a NANO with a microSD card inserted. The microSD card slot is hidden between the two PCBs and fully operational on all NANOs out there. That means every NANO can be upgraded to a NANO SD. As a result the NANO SD is mainly operated like a NANO, it can do all a NANO can plus some extra. There is not much difference when you look onto the base operations. This data sheet summarizes the main specs.

What makes the NANO SD a better NANO?

To say it in one sentence, it adds some of the core Meteobridge PRO functions to the NANO. And on top of this it adds an exclusive feature, a Dashboard base on the HomweWeatherStation template from weather34.com. Please allow us to highlight a few aspects that might be of particular interest to you. 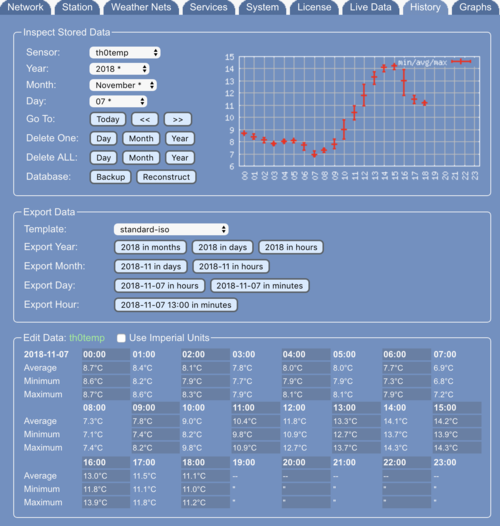 The fundamental difference compared to a regular NANO is that the NANO SD has 2 GB of permanent storage while the NANO just has 16 MB onboard flash mostly covered by the operating system and the application programs. Equipped with 2 GB the NANO SD can hold about 20 years of data. NANO SD holds data for last 72 hours in a per minute resolution and older data in a per hour resolution. Hourly data can be inspected and edited through the NANO web interface. So it just needs a few clicks to select a sensor and the year, month and day to inspect. Data can be changed by simply clicking onto the corresponding value in the table at the bottom. When you change a value on per hour level, the changes will also be propagated to affected data of the day, month and year automatically. This makes handling of logged data rather intuitive and you don't need separate tools for it.

NANO SD also allows to export data of user-defined time frames in various time resolutions. Specification of year, month, day is done in the upper part first. Then you can select a template that defines the structure of the export in the middle part. By pressing one of the export buttons a CSV data export is generated in the export folder of the microSD card. To transfer this data to your PC for follow-up processing or archiving you don't have to move the microSD card, but simply mount the NANO SD as a PC network share. This works natively on PC, Mac or Linux clients. That way the data store of the NANO can be used by all computers in your home network. 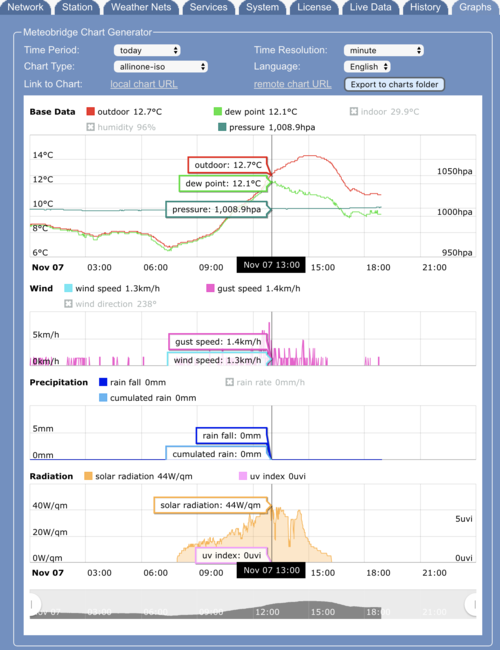 The NANO SD can generate powerful interactive charts based on the data stored locally. All you need to do is to select a chart type and time period to inspect and a time resolution. Having done so it just takes a few seconds for the chart to show up. When you move the cursor into the chart area a vertical ruler provides information about the point in time selected and data boxes for all sensors will show numerical data. Furthermore, you can customize the charts by clicking onto the sensors. This will activate or deactivate display of the touched sensor. The handles at time line's start and end can be moved to zoom in to areas that need further inspection.

These charts are not restricted to be shown in the NANO's web interface only. They can be requested as html responses from within your network or from the Internet (when remote access is enabled) by calling one of the specified link URLs. You can also store a self-contained copy of the chart to the chart folder of your microSD card by pressing the "Export to charts folder" button and from there it is shared as a piece of javascripted HTML in your network. We have exported the shown chart HTML to our web server and you can inspect it with all its interactive features at this link: exported chart

Data export and chart generation are based on templates stored in the template folder of your NANO SD. Therefore, the output format is not hard coded but can be adapted to your needs. This will of course need you to define new templates, but by starting with copies of the pre-defined ones you can tap into this step by step. This also means that other people more familiar with this topic can design templates for you that exactly meet your demands. This level of versatility on data exports and chart generation in particular is rather unique in the world of consumer weather data processing. Graphs are build with the amcharts toolkit which is one of the market leaders in javascript charts and has a detailed documentation in the web which helps you to understand how to adapt charts to your needs.

Having graphs or data exports on the NANO SD in your home network is fine, but many users would like to have periodically generated charts uploaded to their web servers. This allows for making the data public without giving other user access to a device in your home network. Therefore, NANO SD can periodically generate data and charts and can upload it to the Internet. This can be done via FTP or SFTP. Setting up these features just needs a few clicks. You can freely select the interval of data generation and upload and whether the file should be deleted from the NANO's local storage when upload is done. Folder and filename to be used for storage on the web server can be specified in a way that allows to include date information. This is useful to build up an archive of daily chart over time, for example. The example on the right generates every hour a graph of todays weather data, then uploads it, gives it a name containing year, month and day and finally removes it from the NANO SD storage to avoid filling up local storage.

Beside uploading to a web server you also can generate data exports or charts and send them by email with the data or graph as an attachment.

The tiny shape of the NANO SD should not trick you regarding its power. We managed to port the famous HomeWeatherStation template including the needed PHP stack onto the NANO SD and as a result the current and historical data can be accessed in a beautiful and convenient way. You don't have to install anything, just a few clicks on "Weather Network" tab are needed. The dashboard even allows to show forecast and current conditions data. To have that added you simply add individual API keys DarkSky and WXcheck are providing for free for private use. Having the remote login feature of Meteobridge enabled, you can even inspect the Dashboard from the Internet and you can share the link with friends as it does not need the Meteobridge password that protects the admin web interface. To cite a user: "A Davis Envoy + NANO SD + Tablet = Awesomeness!"

As you see there is quite a lot a NANO SD can do more than a pure NANO. 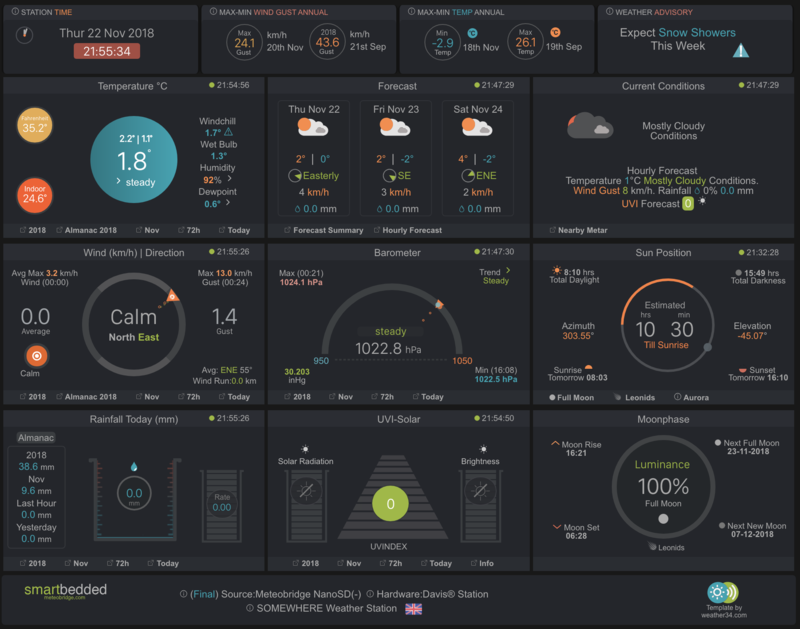 To avoid lots of system fails caused by worn out consumer microSD cards we restrict microSD cards that can be used in the NANO to 1GB and 2GB industrial SLC cards. These are world-wide available from Mouser and other electronic distributors. We decided to enforce use of these high endurance cards to avoid having tons of unnecessary support requests and not to harm the reputation of the NANO SD by failed cards. Please trust in our experience with flash storage issues that there is simply no reasonable way to avoid buying of high-price, high-endurance SLC storage. These are the currently supported microSD cards:

How to insert a microSD Card into the NANO?

Inserting the microSD card between the two PCBs can be easily done with the help of a simple to build one-time paper tool. Please read details here or watch the video below.

To give you an impression how easy NANO SD features can be used, we compiled a few tutorial videos. Don't expect youtube entertainment. It is more a commented click stream but we think that explains best how it works and how to realise use cases that might be relevant to you.

This video shows the most prominent additional functions the NANO gets by adding a microSD card. Operation of the two new tabs "History" and "Graphs" is explained and demoed.

This video shows how data exports and chart generation can be put on a time schedule and how to automatically upload results to your web server via FTP. 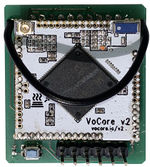 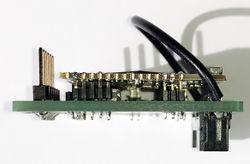 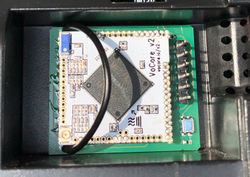